For three-time Olympic bobsledder Neville Wright, the most important lesson of his athletic career is this: experiencing failure is what builds resilience.

In fact, had it not been for the biggest failure in Wright’s athletic career, he would never have gone to the Olympic Winter Games at all. You see, Wright didn’t start out as a bobsledder. He began as a track and field champion.

Neville Wright is a three-time Canadian Olympian and former sprinter who was on the bobsleigh team for the 2010 (Vancouver), 2014 (Sochi), and 2018 (PyeongChang) Olympic Games.

To be successful at an international elite level, an athlete needs at least three things: incredible talent, incredible work ethic, and incredible luck.

Unfortunately, in 2008, luck was not on Wright’s side.

The young Canadian sprinter was on track to nab a spot on the national Olympic team after a record-setting year in which he ran undefeated for an entire varsity season, won a national championship, and won bronze at the World University Games.

But in the lead-up to the Olympic Trials, Wright suffered a devastating loss.

“I thought I was doing well. I crossed the line and then finally my time popped up and I’d missed an opportunity by two hundredths of a second, and it was absolutely devastating. I wandered around the track and I was completely lost. I was confused. I didn’t know what I was going to do. I just thought: I can’t believe this happened to me.”

It was Wright’s track coach, Quin Sekulich, who suggested he give bobsledding a try. Wright was far from enthusiastic about the idea at first.

“That’s a winter sport. There’s no chance I’m going to do that,” Wright recalls telling his coach. “I hate being cold.”

Yet in the end, Wright agreed to give the sport a try. He quickly saw how his speed from track was an advantage at the bobsled track. His physical explosiveness earned him the claim to the fastest start of any new recruit.

“It was a completely new sport I knew nothing about, and I’d just come off experiencing the disappointment from missing the summer Olympics. But I knew I couldn’t be partially in—half in and half out. I had to fully commit, and that’s exactly what I did. The testing camp came around. I made the team that October, and I went to my first Olympic Games that February.”

Though Wright’s success came fast, it didn’t come without effort. His track career ensured he had the speed necessary for bobsleigh, but he didn’t initially have the strength.

“I was already strong in the track world,” he remembers. “And then I switched over to bobsledding and, man, these guys were just throwing weight around.”

The lifting was hard on his body, but gradually he adapted. “What helped me is I wasn’t focused on everyone else’s progress, how much they were lifting,” he explains. “I was focused on me and my personal bests.”

With this attitude, Wright avoided getting discouraged at being behind. He focused on the fact that he knew he already had the speed and if he simply kept improving his strength, he was on the right path to success.

Now he applies the lessons of sport—the discipline, goal-setting, focus, work ethic, and resilience when faced with failure—to what he calls his “big three:” massage therapy, public speaking, and sport performance training.

He also has two young children, but he’s in no hurry to commit them to organized sports.

“My job as a parent is to guide them,” he says. “They’re going to make their own choices where they want to go. They have tons of time to turn sport into work. Let them play.”

1. To raise resilient children, don’t protect them from failure and disappointment.

Building resilience is like weight training, Wright says. Lifting weights, athletes experience micro-tearing of the muscle. When the tears heal, the body forms scar tissue and the muscle not only gets bigger, it gets stronger and more resilient. Likewise, experiencing failure—and recovering from it—is what builds resilience. Growth does not happen without the pain of loss.

“You’ll go into that dark place for a while after a big loss,” he says. “And then you’ll come out stronger.”

2. Children don’t need to commit to a sport at a young age in order to be successful.

Wright was 14 when he first considered becoming a serious athlete, and it wasn’t until his early 20s that he started serious training. Yet as a child he loved to be active, and all that time running, jumping, climbing, and playing at the park helped develop his agility and speed.

“It was more about my joy in movement rather than a commitment to one sport,” he says.

3. Being active doesn’t have to cost a lot of money

“I could only really participate in the free sports,” Wright says. “As for organized sport, we couldn’t really afford it. But I didn’t miss out because in my neighbourhood there were always random games going on.”

Wright quickly got a reputation as the little speedy guy. “I’d have different kids challenge me to races,” he recalls with a grin. “And I’d be whooping them all the time.”

The power of self-discovery: Tips for parents from Olympian Martha McCabe 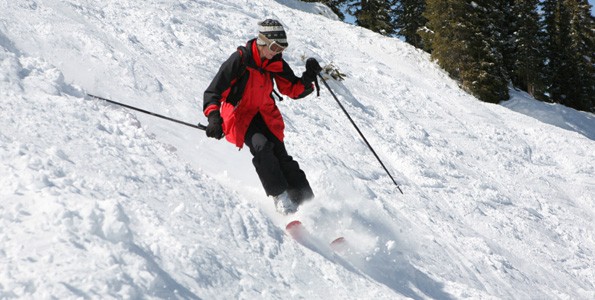 AfL Mini-Games: How your kids can ski moguls at home

Strength and beauty comes in all shapes and sizes