Activities to improve babies’ and young children’s physical literacy are easy to plan, simple to do, and require no special equipment. And, according to a two-year Canadian study in early child care centres, the benefits of adding more active play time into daily routines are more than just physical.

The Physical Literacy Proof of Concept Study in Child Care Settings measured the impacts of adding physical literacy programming for babies, toddlers, and preschoolers in 39 child care centres in Alberta and British Columbia. It found big benefits in all areas of child development (cognitive, social, emotional, and physical), including significant improvements in executive function, language and communication skills, and emotional self-regulation.

But that’s not all: early childhood educators also reported that including more active play, every day, made their work easier, more effective—and more fun!

Over the two years of the study, 23 centres were provided with guidance on how to incorporate physical literacy programming in their daily schedule, while 16 control centres were given no special intervention. Almost 100 early childhood educators and over 600 children were involved in the study, which was funded by Active for Life and the Government of Canada’s Social Development Partnerships Program – Children and Families Component.

According to the researchers, one of the benefits was that the children that received physical literacy programming improved their fundamental movement skills (FMS). More specifically:

And the benefits extended well beyond the children’s physical skills. Educators in study centres who were given lesson plans and information on how to develop physical literacy said:

Notably, 100% of the study group educators surveyed said they intended to continue physical literacy programming after the end of the study.

All resources have been written and piloted extensively by educators over several years and are available for free download.

The Early Years Physical Literacy Research Team has summarized the key findings of the study in a series of infographics: 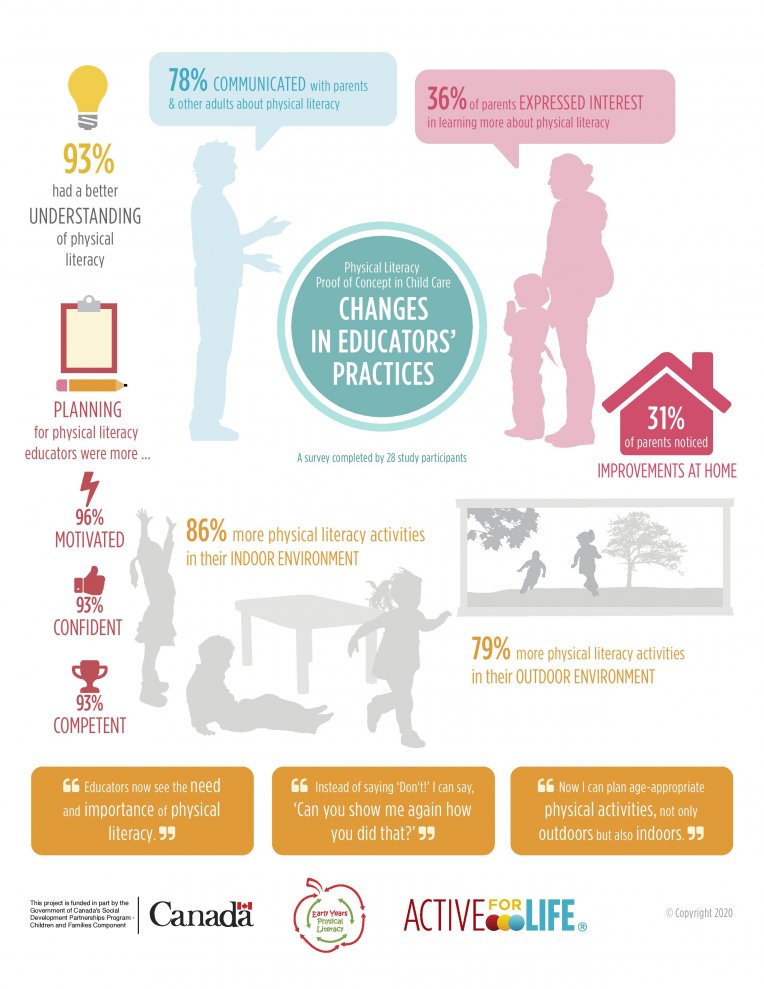 2 responses to “The evidence is in: Physical literacy in childcare benefits children, parents and ECEs”

How to make hiking with your toddler easy and fun ...

Hiking is a great activity to do with your toddler. Here's how to do it in an easy, manageable way.

As kids fall into sedentary behaviors and engage less in active play, they lose much of the strength and stamina needed to be active.

Kin-Ball is a fast-paced, interactive sport that engages a wide range of skills, while promoting physical activity, sportsmanship, and teamwork.

5 tips to engage children with autism in active play