From July 10th to the 26th, more than 7,000 athletes from 41 countries will display their exceptional athletic talents at the 17th Pan Am Games in Toronto.

With 2,600 athletes having competed in the Vancouver Olympics and just over 6,000 in the Montreal Olympics, the Toronto Pan Am games will be the largest international multi-sport event (in terms of number of athletes) ever held in Canada.

Athletes will be competing in 36 sports, many of which you and your children will recognize.

But in amongst the “traditional” sports of soccer, baseball, swimming, gymnastics, and basketball, are some sports that may not be as recognizable.

CBC coverage of the games

What a great opportunity to learn about the sports, figure out their rules, and even better, play them with your kids. And what a great reminder of how many ways there are to get active.

While your kids might not love playing baseball or hockey or any of the other sports their friends play, there is a fun way for every kid to get moving.

While I may think that I walk quickly when I go for power walks in the neighbourhood, I’ve got nothing on true race walkers. These athletes are fast! Race walking has been a Pan Am sport for men since 1951 and for women since 1999. Men participate in 20 and 50 km walks while women take part in 20 km walks.

The rules are as follows:

This is a fun sport to watch with and try with kids. While kids may think that the walkers look a little strange, they may find that trying to walk quickly with one foot on the ground at all times is actually extremely challenging. Kids obviously don’t have to walk 20 kms but measure out a 50 or 100 m route on the sidewalk or in a park or schoolyard and see if your kids can improve their time with each attempt at race walking. Or practice race walking to school. If they get bored with short distances, bring them to a track at a local school and have them walk a lap or two.

Discus throwing can be traced back thousands of years in Greek art and literature and has been a Pan Am sport for both men and women since the start of the Pan Am games in 1951.

Competitors start by standing in a throwing circle inside a cage facing away from the landing area or sector. Discus throwers then spin around one- and-a-half times and release the discus as far as they can. The athletes may touch the inside of the rim of the throwing circle only. The discus weighs 1 kg (2.2 lbs) for women and 2 kg (4.4 lbs) for men and the world record for a discus throw is 74.08 metres.

As with all sports (and most everything in life), the best way to be successful with discus is to practice. Take your kids and a lighter discus (such as a frisbee) to a park or field and have them practice the spin and throw. See how far your kids can throw their frisbee within a roped off area (you can literally use jump ropes to mark out the area into which they have to throw.) While they may not throw their frisbee 74 metres, kids will have fun attempting to beat their distances with each throw.

When I first heard that Handball was being played in the Pan Am Games, my mind went back to games I played in the schoolyard with friends, in which we hit a tennis or other bouncy ball against a wall. But Handball is actually far from that fun but slower-paced game.

The game is a fast-moving team sport played by two teams of 7 (6 players plus a goalie) on a playing surface slightly larger than a basketball court. The aim of the game is to throw a ball into the net of the other team. Nets measure 6.5 feet x 10 feet so are approximately 4 feet wider and 2 feet higher than hockey nets.

Players move the ball by bouncing or dribbling it as often as they can as they proceed towards the net. After catching the ball, the player can take a maximum number of three steps and can then pass or shoot the ball on the net. If the player walks more than three steps without bouncing the ball, or holds the ball after catching it for more than three seconds, it is deemed a “walk” and possession is given to the other team. Nets are surrounded by an almost 20-foot zone in which only the goalie is allowed, so shots can either be taken by throwing the ball while outside the zone, or by jumping into the zone while shooting (the ball must not be in the players’ hands as they are in the zone).

Defenders can use their hands to block the ball and can use open palms to take the ball away from the opposing player. Body contact can also be made in a face-to-face position but defenders cannot pull or hit the ball out of the opponents’ hands, hold the opponent by their body or jersey, push, run, or jump into an opponent.

All players can use only their hands to touch the ball except for the goalie who can use any part of their body, including their feet, to block shots.

Games consist of two 30 minute halfs, and with no stoppage between goals, scores of 20 to 30 goals per team are common.

To introduce Handball to children, the age of the kids will determine the court size and size of the ball used. The game can be played in the backyard or schoolyard with hockey nets as goals and kids can practice dribbling the ball, taking shots, and trying to stop their opponents. In Canada, many camps have started introducing handball as part of multi-sport programs.

The triathlon is one of the most recent and fastest growing sports in the world. The first event took place in California in 1974 and was introduced to the Pan Am Games in 1995. A total of 35 women and 35 men will take part in the event in Toronto this summer.

The event consists of a 1,500 metre open-water swim, a 40 km road cycling course, and a 10 km run. Transitioning from a wet suit to cycling gear and onto a bike is known as the first transition or T1 time, and the changeover from the bike to running apparel is known as T2.

While the triathlon is a relatively modern event, events for kids (as well as adults) have risen in popularity very quickly. Kids are used to swimming, cycling, and running but putting all three together without a break is a challenge. Triathlon training groups can be found in all provinces across the country and “Try a Tri” races are held throughout the year.

At home, though, kids can practice putting two events such as a bike ride and a run together, or if you’re near a lake or pool, putting a swim and a run together. Distances for kids in organized events vary depending on age, and at home, start with small lengths and aim to increase the distances as kids master the transitions.

One event which is competed at the Pan Am games and not in any other multi-sport competition is roller figure skating. The event first appeared in the Pan Am Games in 1979 and while it is not a very popular sport outside of the games, participants in the 2015 games hope to see interest rejuvenated.

Roller skates themselves were first invented by a Dutchman in the 17th century who was disappointed when the ice on the canals thawed and he was no longer able to ice skate. Wooden wheels were attached to the bottom of his shoes, and in the 18th century roller skates evolved with the attachment of metal wheels. The first roller rinks appeared in London in the 1850s and in the United States in the 1860s when four wheels made the skates more maneuverable and a toe stop was added to the front. As opposed to inline skates which have between two to five wheels in a single line, roller skates have four wheels in two lines with a brake or toe stop, and are more suited for artistic moves.

Maybe your child doesn’t love the cold of ice skating or loves ice skating and wants to try an outdoor warmer-weather skate. Roller skates can be purchased through sporting goods stores or on online sites such as Kijiji. Remember to always have your child wear a properly-fitted helmet. Kids can practice around the neighbourhood or in an indoor rink and can practice moves by experimenting with those they see performed at the Games this summer.

One of the most exciting elements of witnessing multi-sport competitions such as the Pan Am Games is the opportunity to watch and learn about untypical athletics. While we may be used to registering our kids for organized sports such as baseball, hockey, gymnastics, or basketball, there are so many other opportunities for kids to get active. 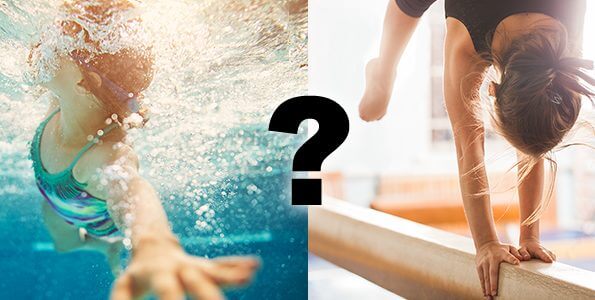