Father’s Day is almost here, and with it comes the official start of summer. What a perfect opportunity for dads and their kids to get outside and enjoy playing some fun games together.

If, like many parents, you’ve found yourself quickly running out of new ideas ― beyond the usual suspects like sardines, croquet or badminton ― we’ve got a few activities you might not have considered; interactive games that are not only fun, but that also improve motor skills and develop hand-eye coordination.

From creative ways to cool off on a hot summer day, to “koekhappen” (a Dutch children’s game) there are plenty of activities that dad (and mom) can enjoy with the kids. And most require nothing more than some simple household items … and a little imagination.

So let’s get started.

On a hot summer day, nothing beats water sports.

With water limbo, all you need is a hose, and a nozzle that provides a steady, straight stream of water.

Take turns, and continue lowering the water stream until you reach a point where the kids can no longer get underneath without getting soaked.

Take precautions to make sure that the ground isn’t too slippery for the kids to safely get under the water stream without falling. Placing rubber matting on the ground beneath the stream can help with this. It’ll provide traction for feet, and a cushion in case anyone tumbles.

Here’s another great water game that’s easy to set up.

If you have a kiddie pool, Freeze-Up is a fun activity that can help to develop foot coordination, and cool everyone off at the same time.

Fill the pool with water and add ice cubes, and then have each person try to remove the ice cubes with their feet.

To make it more difficult, see if each of you can remove an ice cube with only one foot.

The person to remove the most ice cubes is the winner.

Pair up, with each pair holding an open bath towel between them.

Try to toss and catch a lightweight ball from towel to towel. (If you’re indoors, best to use a softer ball like the kind made by Nerf.)

Count how many times you can toss the ball back and forth before it hits the ground.

This is a fun game for two players. It helps develop motor and spacial coordination, along with concentration. And all you need is a tennis ball and a wall with a relatively flat, even surface.

The idea is to throw the ball at the wall, then before it bounces back to you, quickly perform certain actions before catching it.

You can work your way through each action one time, and then proceed to the next, or adjust the game so that each player must perform each action several times in repetition before moving on to the next action.

If you miss, you lose a turn and have to start from the beginning on your next turn.

Here are 8 different actions you can try:

1. Throw the ball and catch it before it bounces on the ground.

2. Throw the ball and catch it after one bounce on the ground.

3. Throw the ball and catch it after two bounces on the ground.

4. Throw the ball and catch it after you touch the ground once.

5. Throw the ball and clap your hands before you catch it.

6. Throw the ball and touch your knees before you catch it.

7. Lift your leg and throw the ball under your knee before you catch it.

8. Throw the ball and catch it after turning around once.

If all this is too easy, change hands and try repeating the same actions with your non-dominant arm.

For this game, you will need a few supplies:

Start by cutting a half dozen holes of different shapes and sizes into the long side of the shoebox. Circles, rectangles and triangles are a good starting point. Each one should be big enough for a marble to pass through.

Place the box upside down on a flat surface and put the book or shoe on top to weight it down.

From a designated spot, have the players take turns trying to shoot their marbles through the holes.

If a marble misses the holes, it stays where it lands.

If a marble goes through a hole, its owner retrieves it and collects the designated number of marbles as indicated by the number above the hole, e.g. if the marble went through a hole with the number 3 written above it, the shooter collects 3 other stray marbles from the playing area.

If there aren’t enough stray marbles remaining in the playing area, have each player put one or two marbles into a kitty, from which the shooter is paid.

The Egg-and-spoon race dates back to the 19th century, but remains just as fun and challenging today. It’s also a terrific way to develop balance coordination.

All you need is enough spoons and eggs for each participant. Use hard boiled eggs for tiny tots and raw eggs for older children. Another variation of this game is to use a potato instead of an egg. Less mess, but also less stress.

Have your competitors line up next to each other, each one holding a spoon in one hand with an egg on it.

With one hand behind their back, have your kids race to a pre-set finish line, trying not to drop their eggs.

If somebody’s egg comes off the spoon and falls to the ground in an older children’s race, using raw eggs, they’re out of the race.

If your younger kids drop the hard boiled eggs the first two or three times they attempt a race, allow them to pick it up and go back to the start line to begin again (while the rest of the race is going on). Just be certain they remove their hand from the egg and place it behind their back before again attempting to cross the finish line.

The first one across the finish line wins.

This is a traditional Dutch children’s game. A cookie is affixed to a thread and suspended from a tree branch or artificial structure of some sort.

Each player takes their turn trying to eat the food item from the thread while keeping their hands clasped behind their backs.

One can substitute healthier snacks for this game, too. Try cutting an apple into segments, drilling a hole in each segment, and then running the string through that hole to suspend the fruit.

The sun has gone down, it’s twilight, but for whatever reasons everyone is still full of energy and looking for a simple, fun, active game to play together.

How about Glow stick tag? It’s a new wrinkle on an age-old favourite.

What you’ll need for this game are, of course, some glow sticks (sometimes known as light sticks). If you don’t have any lying around at home, they’re inexpensive and easily obtained in bulk at retailers such as Canadian Tire and a variety of hardware stores.

Play the game the same way you would play regular Tag. The person who is “It” has the sole red glow stick.

Play continues until everyone has had a chance to be “It”. 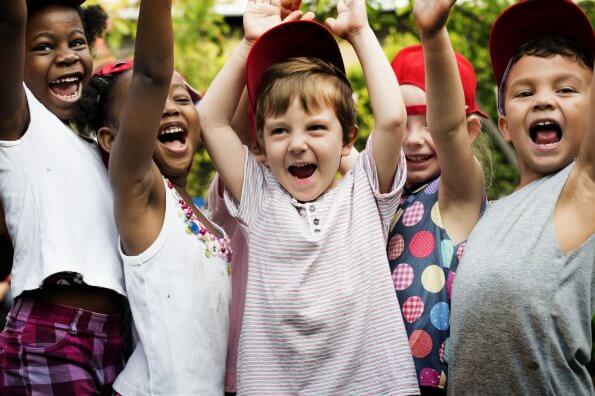 “Thrive by Five”: Why the early years are so important

Active for Life is one year old!

We're celebrating by getting active and with a new contest 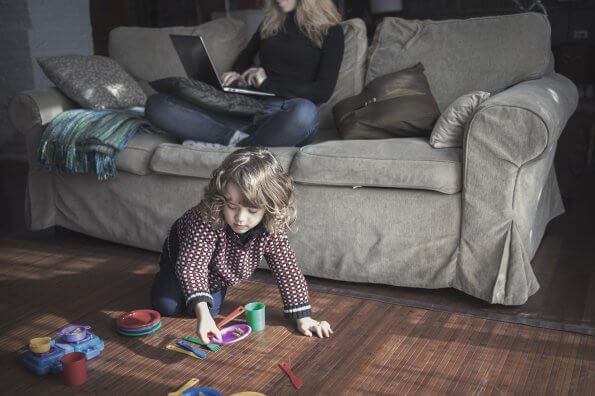 There’s no doubt about it: trying to juggle working from home with children is challenging. These activity ideas will help you out!