If you’re considering a new sport for your kids, kayaking may be a good one to check out. Kids develop core muscles and upper body strength, and – best – they have fun while they’re learning.

“Especially with little kids, who can’t swim very well and they’re scared of water. Put them in a kayak with a life jacket, and water becomes this fantastic place.”

Across Canada, myriad offerings are available, from weekly courses throughout the year to intense summer camps and more.

Aquabatics Calgary offers a range of programming for adults and children, including youth and teen summer camps. Some are offered in an indoor pool in winter, while others take kids to local lakes and rivers, where the guides know safe routes and learning opportunities for a variety of skill levels.

Micro Groms, for instance, is a beginner course for ages five to nine. There are no set goals, other than to get kids into kayaks, “introduce basic paddling strokes, play lots of games and drink hot chocolate on a regular basis,” according to the Aquabatics website.

While five years old may seem young to let a kid out in a kayak on a lake or river, all instructors are certified and trained, says Coward. An avid outdoors lover with international experience, he has had his own son out on the water pretty much since birth.

“It’s a great way to be outside,” Coward says. “It’s something a little different, and there’s a great community around it.”

Indeed, Coward has been part of that global community for decades. Born and raised in Australia, Coward took an outdoor education program after school in New Zealand, and then travelled the world, paddling, rock climbing, mountaineering, and snowboarding. He worked as a raft guide for a time in Golden, B.C., but when the opportunity to work and live in Calgary came up, he jumped at it.

In 2009, he and his wife bought Aquabatics Calgary, where he now works as one of the instructors.

One of the things he loves most about kayaking is that there are very few prerequisites; in fact, you don’t even need to know how to swim, he says. “Swimming skills help, but they’re in PFDs (life jackets), so it’s more about learning to be comfortable in water,” Coward says.

After a kayaking class, however, many kids have so much fun that they become motivated to improve their swimming skills. “It’s a bit of inspiration for them to learn how to swim better after a course,” Coward says with a laugh.

And those core muscles? They’ll use those in whatever sport they decide to pursue next, he notes.

At Aquabatics Calgary, Coward encourages adults to come out and learn at the same time as their kids. Many times, he’s seen adults who, encouraged by the fun their kids are having, sign up for an adult course and, now, the entire family is kayaking together.

“It’s a fantastic family activity,” he says. “It’s a very safe sport, and there are a lot of really good opportunities for paddling here, close to the city.”

And while you can find ways to paddle competitively if you want, you don’t have to, he says. “You can just get out and do it for fun.” 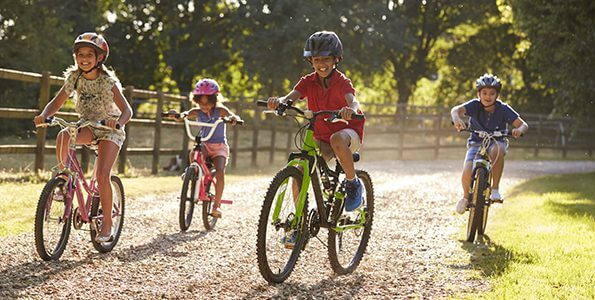 Create your own back-to-school bike rodeo

A fun way to practice bike safety with neighbours

8 ways to keep your kids active on a budget