Adam Levine is world-famous for his musical career, but he’s equally passionate about his yoga. New York Rangers goalie Henrik Lundquist can block like a champion but he also plays a mean guitar. In high school all Sheryl Crow wanted to do was run track. These are not just factoids for the next time you’re watching Jeopardy; it turns out, a life in sports and a musical background often go together.

It’s true. In fact, an article in the Toronto Star pointed out that of the 227 Canadian athletes who went to London for the 2012 Olympics, 19 studied at the Royal Conservatory of Music, where even rowing champion Silken Laumann attended. Says James Anagnoson, dean of the renowned Glenn Gould School at the conservatory, “It’s really fascinating to see how athletes and musicians perform.The physical skill and stamina needed, the hours of practice, the dexterity and level of technicality required to perform at a high level are all key.”

We all know it takes great discipline to succeed, and to be a top athlete or performer requires a similar drive, but one of the best endorsements is the nickname musicians get as “the elite athletes of the small muscles.”

Jesse Cooney, a gymnast and member of the 2010 world champion coed Team Canada Cheerleading squad, clearly agrees. “The skills are transferable. There is a sense, an attitude that is instilled in music competition that you shouldn’t settle for less than the best from yourself … And in music there is relentless preparation, just like in sports. You’re trying to make sure there is no room for error.”

Another article at NPR music chronicles how some of those Olympic competitors found their place in sports after showing skill in the music world. Of particular interest was Olympic hopeful Heather Steacy. She wasn’t very into sports, preferring to play her clarinet. It was later that she explored swimming and figure skating, eventually finding her fit in the hammer throw division, where, funnily enough, her brother is also a competitor.

What can we take from this, aside from some impressive Cliff Clavin stats to bring out at parties? Clearly, children need opportunities to flex all their muscles, whether for sports or music. Developing physical literacy from an early age can help them to succeed in whatever arena they eventually choose. But being too focussed on just one thing can preclude the opportunity to discover strength in another area, and there will almost always still be time to specialize later if they want.

Your child may not make it to the Olympics or sell out concert venues, but letting them explore lots of possibilities and encouraging them to follow their dreams, that is some MVP parenting.

How Australia is successfully bringing risk back to recess 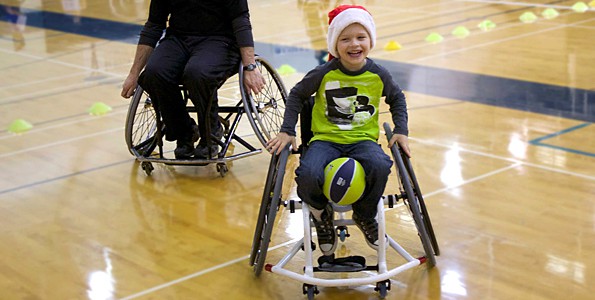 A unique program for kids with mobility impairments