Elfi Schlegel-Dunn (in the picture above she’s on the left and her sister, Andrea Schlegel, is on the right) may have won multiple medals as a Canadian National Team gymnast from 1976 to 1985, but her approach to helping children learn movement skills is refreshingly relaxed. A mother of three kids, Elfi co-founded Schlegel’s Gymnastics Centre in Oakville 15 years ago with Andrea, a former rhythmic gymnast. “People find it shocking that with our highly competitive background, we’re running a purely recreational facility,” says Elfi. “But we’re just here to get kids started.”

We caught up with Elfi, also the author of The Gymnastics Book: The Young Performer’s Guide to Gymnastics, to find out how she motivates her gymnastic pupils, her children, and even herself to stay active.

What is the programming philosophy at Schlegel’s Gymnastics Centre?

The focus is on the three Fs: fun, fitness and fundamentals. Our program also promotes the physical, emotional and social development of children. We teach how to respect safety, too, because we want them to have a positive experience. They’re learning the basics of the sport and much more.

How is the term “physical literacy” received by parents?

I use that word with parents. It’s a great phrase to help them understand that children need to learn how to make their body work. That’s why I start the program at 18 months. It’s an opportunity for parents to give their child a gift, by teaching them the building blocks of physical movement.

We’re jumping, skipping, swinging, rotating and learning to jump with two feet. We work both sides of the body, and both sides of the brain. When I was competing, people would ask, “What’s your strong side?” But what we do in our gym is to build both sides. We call it bilateral movement.

How does gymnastics prepare children for other sports?

It’s a good foundation to have. My own kids all come to the gym for their 90-minute class each week. They know how to climb a rope and they have a sense of balance. When my 10-year-old son Cameron was younger, he would say things like, “I don’t feel like sweating today, mom.” It was shocking to me, and I was thinking, how am I going to get my son to change? But now he’s starting to define his sport. He’s taken up archery. His archery coach, Olympic coach Joan McDonald, says that core and upper-back strength are key, so gymnastic training is excellent. Over the years a lot of coaches have said to me, “We love kids that have gymnastic training.”

Do you get parents involved?

In the past we’ve opened up the gym to moms and dads. Sometimes it’s in a pure adult class, after they’ve put the babes to bed, that you see the light bulb go on. They’ve watched their kids, but now you’re taking them through the stepping stones of the move and they’re huffing and puffing, realizing that it’s a lot harder than it looks. So now they get why their child is having such difficulty staying in the middle of the trampoline, for instance. It’s such a revelation.

Why should boys do gymnastics?

It’s equally good for boys and girls, because there’s no gender bias with the equipment. It’s about exploring their bodies and getting them to enjoy physical activity. You need to hook them early so that they have fun sweating. In the boys gymnastic class, I stand them on the balance board and throw balls at them—we’re not making them do toe dips. Gymnastics keeps them busy. As boys get older and start to do team sports like soccer, hockey and baseball, they start tightening up, especially around the glutes and lower back. Gymnastics helps keep them mobile and flexible.

How do you keep your own children active?

My kids have always taken gymnastics, but we also put them in swimming and soccer. Olivia would be picking daisies on the soccer field while Cameron was trying to set up playdates. But Benjamin, my youngest, is seven and he loves soccer. There was perseverance on our part. When we sign them up for an activity, we say, “you don’t get to quit, you have to finish the program.” We walk a lot. Even on road trips we stop and my husband will set up an obstacle course for 10 minutes so we get some activity out of the car. Television isn’t really a part of our lives—we got rid of cable. During a recent snowstorm, the school bus couldn’t take my son to school, so we went outside and shoveled. It was great exercise! Plus, they learn by example. The last thing I want is for them to sit in the house.

How do you maintain your own physical skills?

I’m now 48. It’s not as easy as when I was 25, and I do feel the aches and pains of my gymnastics training. I have signs of arthritis where some of those joints were sprained a million times. So I avoid the pounding sports. At the gymnastics centre, of course, we’re always moving. Andrea and I love what we do, and the more active we are, the more the kids will be. I don’t go to a gym anymore, but I do power walks throughout the day to the kids’ school. I’m also getting ready to do The Ride To Conquer Cancer, which is a big step up for me. When I’m on road doing events, I go to the hotel gym for 20 minutes or use a Thera-Band in the hotel room.

It’s a daily goal of mine to educate people and to explain to parents why physical literacy is so vital to the learning of their child. I think about my own three and see how far they’ve come. In terms of physical literacy, the school system’s not offering much these days. So why wouldn’t you want to expose your child to gymnastics? When they’re younger, you don’t have to pick 10 things for them to do or over-program them—that can wait. But they will benefit from a recreational gymnastics program and then they’ll have confidence. 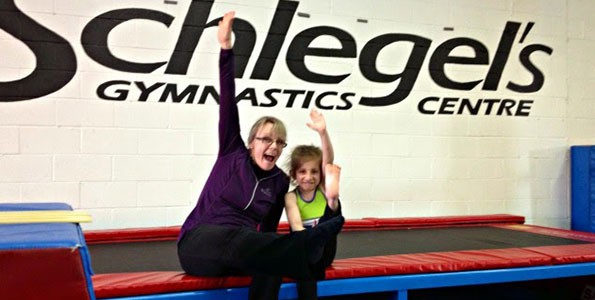 18 ways to get kids to go outside

Playing outside is crucial to a child’s proper development