As Canada prepares for the Olympic Games in Rio this summer, there’s something else going on across the pond. If you’ve noticed flags popping up on cars and wondered why bars have been unusually busy mid-day, the answer is the UEFA European Championship. Euro Cup for short.

Similar to the World Cup, but limited to a 55-country collection of European nations, the Euro Cup is a month-long battle between 24 senior men’s national soccer teams. Featuring tournament first-timers Wales and Iceland, this edition of the Euros is perfect for those new (and not-so-new) to the beautiful game.

If your family has yet to take in a game on television, you’re tuning in at the best time. With group games finishing up today (June 22nd), the pool will be narrowed to the top 16 teams on June 25th, where every game needs a winner to be whistled to an end.

But what makes the Euro Cup special for parents and kids — apart from highlighting exquisite athleticism and soccer skill — is that the competition is a showcase for inclusivity, children’s rights, anti-discrimination, respect in sport, and environmental awareness. Organizers of UEFA Euro 2016 have developed a social responsibility and sustainability strategy to leave a positive legacy long after the final goal is scored.

Here are some key Euro Cup moments that I recommend you tune in for:

In the pre-game ceremony, the two teams walk onto the field together — holding the hands of boys and girls dressed in tournament gear. Imagine being a child walking alongside the biggest soccer stars in the world into a stadium of 80,000 fans!

Before the starting whistle, both teams line up and the national anthem for each country is played. Most of the players sing and the stadium erupts as tens of thousands of fans join them with spirited gusto. During the Euro Cup, kids will be able to hear the anthems of France, Italy, Croatia, Hungary, Albania, Northern Ireland, and many more.

3. Showing respect for others

After the anthems and prior to the start of the match, both teams pass by each other and all players shake hands. Respect for opponents and game officials is a fundamental value promoted at every international soccer competition, as is respect for persons of all races, genders, colours, and creeds.

At random intervals throughout the game, fans will spontaneously generate a human “wave” that circles the stadium as entire sections of spectators stand up and sit down in quick succession. The human wave is common at other sporting events and is sure to enitce your kids to join in.

When players score a goal, they always celebrate. Some celebrations are highly-ritualized personal routines while others are short dance numbers native to the scoring country. You’ll see players backflip, slide, and “dogpile” after a goal, which might inspire your little player to create a celebration of their own.

It’s very common for fans to dress up, paint their bodies, wear wigs, sing team songs, and even play musical instruments. As cameras scan the crowd, kids will be able to appreciate different cultures and witness passionate supporters. Sometimes spectators (and players!) are so passionate that a loss can cause them to cry. Soccer is an emotional game and there’s no shame in showing vulnerability.

When the final whistle sounds, players from both teams will approach their opponents and trade shirts. It’s a sign of respect for each other, and the jerseys also become prized keepsakes for the players. There’s a lot of young talent in this year’s Euro Cup, and some players might be squaring off against their idols!

The official mascot for the UEFA Euro 2016 is a young boy, whom the public voted for and named Super Victor! Wearing a red cape and magic soccer cleats, Super Victor brings fans together from all over the world to share happiness and celebrate soccer. For Super Victor and the Euro Cup, the most important thing is having fun and playing fair.

These are some of my top reasons for watching the Euro Cup with your kids. It’s not too late to tune in, and you might discover your favourite reason to watch and even witness a special moment in soccer history. As the competition gets more intense, so does the excitement!

Don’t change your dream. Change the world. That’s the messaging behind Nike’s newest ad, highlighting girls and the game of soccer. ﻿ In the ...

League standings or not, kids will still learn how to ...

Why you need to teach kids under twelve to love the game, and not worry about league standings 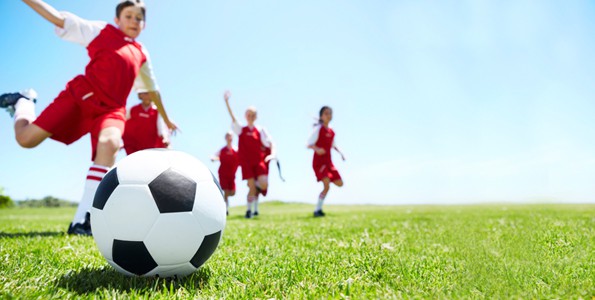 7 reasons soccer is essential for kids

You might think of it as a physical literacy wonder drug