I listen to podcasts when I exercise or walk my dog. One of my favorites is a podcast called “99% invisible”. It’s about “all the thought that goes into the things we don’t think about – the unnoticed architecture and design that shape our world.”

Why am I writing about a design podcast? Because in a recent episode about the garish designs of basketball uniforms in the ’90s, they inserted a short segment about the evolution of the soccer ball. Basketball, soccer, what could be more AfL?

The ball is one of the oldest and most universal toys in the world. In fact, the ball is so popular and universal that it has its own category of games: “ball games” are played around the world. Which brings us to the most popular ball game in the world: soccer.

While in many sports, the ball remains the same – think of football, baseball or basketball – in soccer, manufacturers like to experiment with different designs and colours. In less affluent countries where kids cannot afford one of these “real” soccer balls, some kids even create their own with whatever material is available.

But more often than not, the ball changes for marketing reasons. FIFA (Fédération Internationale de Football Association), soccer’s governing body and the organizers of the World Cup, create a different official soccer ball for each World Cup. And the difference is more than the colour of the ball. For example, the ball for the 1970 World Cup was made of 32 panels while this year’s World Cup ball is made up of only six panels. This means that the two balls might travel differently through the air, and that players must adjust to the different designs. But more importantly, the ever-changing ball ensures that soccer fans purchase a new ball on an on-going basis.

The “Adidas Telstar 18” is the official ball of the 2018 FIFA World Cup. When you look at the Telstar 18, one thing stands out: As soccer balls have become wilder in their designs since the ’80s, this one is a throw-back to the iconic black and white soccer ball. It is not only a throwback in design, but also a throwback in name. The official ball of the 1970 World Cup was also called the “Telstar”. 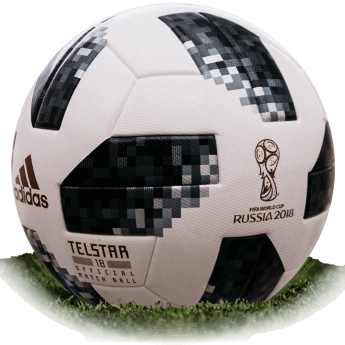 According to “99% invisible”, the original Telstar design served only one purpose: “This pattern made the ball’s form and motion clearer both on the field and on home screens, a big improvement on the uniform organic colours of earlier balls.”

So what has become recognizable as the iconic soccer ball was created to be easily seen on TV. And it is the same with the “Telstar 18” ball. Not only will it be clearly seen on high definition TV, but it also has a built-in Near Field Communication (or NFC) chip that allows the ball to connect with smartphones, tablets, and laptops.

I could have dug deeper in my research to figure out why and how the ball would connect to these devices, but I chose not to. Instead, I re-watched one of my favourite soccer videos “TMB Paynee FC” which tells the story of a group of boys from a tiny fishing village in Thailand and their struggles to play the game they love. This short film (5 minutes) is truly inspiring and it connects to the heart and soul of the game … not your smartphone.

How much is too much screen time for kids? (And ...

Kids today are growing up in the digital age and have access to many types of media. How much is too much screen time ...

The 2022 FIFA World Cup in Qatar will offer teachable and inspiring moments for kids and parents alike. Here's why you should tune in.

Learn how incorporating physical activity into your child’s daily routine can help with the symptoms of after-school restraint collapse.

The evolution of a soccer club

The changes weren't easy, but the kids really benefitted

These soccer players practice skills and learn team play while ...