Four years ago in Vancouver, the dominant theme of my son’s Olympics was “Flags of the World.” He and a friend spent countless hours researching, drawing and colouring dozens of flags and hanging them around our own personal Olympic headquarters.

In the space between two iconic moments – k.d. lang’s version of Hallelujah at the opening ceremonies, and Sidney Crosby’s golden goal –  he was in the arena for a couple hockey games including Canada’s 7-3 destruction of Russia in the men’s hockey quarter-finals.

So I wonder what the Olympic experience will be like for my son this time around, at age 9?

One of my jobs as a sports dad is to continue to teach my son about the value of hard work, perseverance, and sacrifice – not just in sport, but in life. And there will be no shortage of stories about overcoming adversity en route to the Olympics.

But how much sacrifice should a kid of nine make toward a dream, whether it’s getting to the Olympics or chasing a Stanley Cup ring?

This winter, we’re playing hockey with several kids who are on the ice 10 or more hours per week. To me, the barometer of how well that’s working for a kid is whether the joy is still there, day after day.

The verdict? Some of those 10-hours-a-week kids just can’t get enough, arriving at the rink with a skip in their step and a smile worthy of a Tim Horton’s ad.  Others look burnt out, treating game day like just another day on the ice.

If sport is little more than work at age nine, is it worth it? And whose dream is it?

As a dad, I think it’s important to ask yourself that question on a regular basis.

Heading into Sochi, I expect that my son will get over the fact that Steven Stamkos is not superhuman after all and won’t recover from a broken leg in time to play for Canada. My son will embrace both the men’s and women’s hockey teams, and he’ll discover a new hero or two – could it be in moguls? Snowboarding? Skeleton?

But one thing’s guaranteed. If he has the option to ditch the TV for road hockey with his buddies, he’ll take it.

Things my son has learned about Russia so far

While we’d prefer that politics would disappear from the Games, that’s not going to happen. So let’s just roll with it. As a parent, the Games stands as a chance to educate kids about geography, culture … and deep dives into the merits of Luongo vs. Price.

Even before the Games opened, my son has learned that: 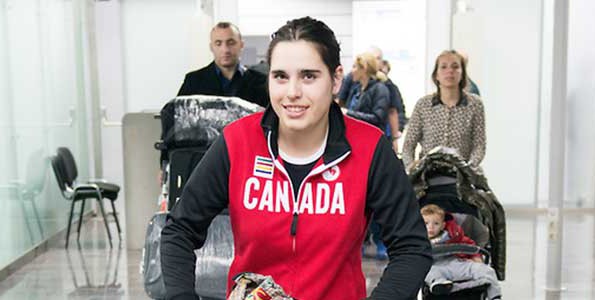 Every graceful glide begins with balance