“If sport has a high point of the year, it must be the first week of spring. When I was growing up, I used to love this time of year. It was when I put my hockey equipment away and I was absolutely ecstatic to see the end of the hockey season.”

I always loved the Great One’s take on spring hockey, on how baseball and lacrosse provided the balance – and the change of pace – to renew his love of sport each spring.

But after years of parroting Gretzky’s comments to everyone who would listen, here I am, enrolling my kid in spring hockey. Hypocritical? Probably. A bad idea? Maybe. But here are some thoughts on how I got here, and why I think it might work.

At the top of the list of reasons is the fact that Olivier, just turning 8, can’t get enough hockey. He and his friends play on the ice, in the park, on their knees inside the house, and on-screen with the PS3. Next on the list is that he’s continuing to play other sports, including winter and spring soccer.

And then there’s my experience – good and bad – with two years of winter hockey.

The problem with initiation hockey

Hockey Canada got it right when it decided that “Initiation” hockey – for ages 5 through 8 – should be all about fun, skill development, equal ice time and (with no scoreboard until age 8 ) a de-emphasis on winning. I’ve volunteered as an assistant coach in that program and have been wowed by how most kids have taken great strides in everything from skating to their understanding of the game.

But as the parent of a tall kid who has a knack for scoring goals, I’ve quickly learned that the fun-first, participatory nature of Initiation hockey has its limitations. The skill gap between kids can be enormous, and all the kids pay a bit of a price for that gap.

Bad habits can form when the better kids get accustomed to skating end-to-end to score their limit of three goals, the so-called Gretzky Rule. I really like the rule, as it reduces the incidence of one-sided games and helps kids learn to pass and be part of a team. But while some kids do just that, I’ve seen others – because of poor leadership from coaches and/or parents – have no idea what to do after they bag their three goals.

Meanwhile, the weakest players on the ice almost never touch the puck and have virtually no hope of scoring or checking. And in practices, their presence waters down the effectiveness – or at least the speed – of drills. We’ve sometimes split kids up by ability for skating drills, but with puck drills, the weaker kids benefit most from a partner who can make a good pass to them, or to offer some checking resistance while skating backward.

The result is that Olivier, thanks to several hat tricks, has a false sense of his progress. He has the hands to score, plus the size and strength to skate around many players. But because he’s been successul, he feels he can sometimes cheat on skating drills or check opponents by stepping up, flat-footed, to steal pucks when he should be skating backwards and turning in pursuit of strong skaters.

Frankly, he’s falling behind in his skating. And I feel he needs the challenge of playing and practising with, and against, better players. My son is naturally competitive, and I expect he’ll rise to that challenge by working harder at the things he doesn’t do that well.

This isn’t about developing a future pro hockey player, just about maintaining my son’s enthusiasm for the game. In some games, Olivier has played on a line where his fellow forwards had no chance of keeping up to him, and he was left to try to weave – unsuccessfully – through three or four rivals without any option to pass. His enthusiasm often ebbs and flows, depending on the level of players he’s on the ice with.

How important is enthusiasm? When you’re getting your kid out of bed at 5 a.m. on a Sunday morning for a 6 a.m. practice, he’d better be having fun on the ice.

When the fun disappears, so does the commitment. Last year, his soccer experience – playing on a team riddled with kids who often would have preferred not to be there, especially in the Wet Coast rain – eroded his love of the game. This winter, it’s a whole different story on a strong team with a great coach.

Asked which sport he likes best, Olivier says soccer and hockey are dead even. And I love that.

Finding the positives in spring hockey

Now, about spring hockey. Skating free of the fun-for-all encumbrances of winter hockey, these programs generally emphasize excellence through the formation of select teams. We were astonished by a few emails from high-powered spring-league teams with intense travel schedules and costs of $2,000 or more for the spring season.

In the end, we were sold on a lower-priced program that, in the experience of friends, offered good-quality development, some off-ice sessions including ball hockey and a nice social component in a schedule that should offer far more balance. The clincher is that a few of my son’s close friends were joining the same program.

We’re hoping that for now, hockey, soccer and school can coexist in the spring. It will be an experiment for all of us, but who knows? Perhaps by the time next spring rolls around, my son – like Gretzky – will choose to pick up a baseball bat or a lacrosse stick to step outside the arena for a five-month break.

That’s what I did year-after-year as a kid, and I’ve played hockey 44 of the last 45 years.

9 responses to “Confessions of a hockey dad: Spring hockey”

Will the skates stay sharp this summer?

The NHL has finally wrapped another season (congratulations to the L.A. Kings), but a new hockey season is only a few months away. Canada’s ...

9 fun and active gifts for the kids on your ... 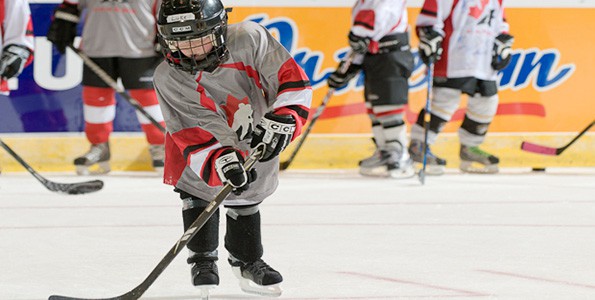 When your kids play hockey, it’s okay to have expectations ...

Enjoyment and skills development should be high on the list