I remember an old television commercial that showed a jogger pounding the pavement in the early hours of the morning. It’s obviously cold outside and a woman smugly watches from her window as she snuggles under her blanket and drinks a hot cup of coffee.

For years, that was totally me, minus the nasty instant coffee.

Even though I’m active in other ways, I’ve always said I would never run. So it was a big surprise when I started hearing, almost imperceptible, whispers in my head saying I should try it. At first I ignored them; the louder, smugger, coffee-drinking lady in my brain drowned out the faint whispers.

Then I went to buy a new pair of walking shoes because my old ones were completely worn out. I found myself asking the salesman if these shoes would be appropriate if, say, I felt like bursting into a run. I looked around to see who asked that insane question, but he was still looking straight at me and said yes, you’ll be good in these.

Apparently technology has come a long way in the 10 years since I last bought a pair of running shoes because I did, in fact, feel like bursting into a run when I had them on.

And so it began. A few minutes of walking followed by a minute of running, and back and forth until I was shocked to find I am able to run longer than I walk. I’ve been doing this most mornings since mid-August and find the solitude addictive. Running is time for me to think, when I can just be Sara, as opposed to Sara the wife, mom, friend, etc.

It’s true that I will usually avoid competition. And I felt a bit of panic when my first tennis lesson changed from a simple rally to keeping track of points. I’m not crazy about letting people down or failing to measure up. And although it is billed as a beginner class, I’m pretty sure I am the only true, never-picked-up-a-racket-before beginner, so I knew I would be, in the words of our tennis instructor, the “non-winner”.

In the past this feeling would have made me feel like quitting, but now I think differently. After being involved with Active for Life and exploring what sport and activity means to raising healthy kids, I see that I need to push past my discomfort around competition and not knowing what I’m doing and just focus on learning this new skill. Once I know how to play, I can do my own thing and find some like-minded people to play with. I’m also open to the possibility that the competition will end up being part of the fun.

Two people I am looking forward to playing with are my kids, ages 7 and 5. After seeing my excitement about learning the sport, they both want to sign up for spring tennis. This is a small miracle, given that the courts are right behind our house and I’ve been after them to try tennis for a while. But, until I pushed myself out of my own comfort zone and tried it, they wouldn’t budge.

We always talk about being role models to our children, but it’s pretty powerful stuff to see the attitude and behaviour shift first hand.

So, while I may never be considered “sporty” in the traditional sense, I’m getting sporty on my own terms. And although I make no promises to run on cold, dark mornings, and I will always love snuggling up on my couch, reading and drinking tea, it’s pretty cool that I’ve surprised myself to the extent that I really don’t know what I’ll do next.

Running is time for me to think, when I can just be Sara, as opposed to Sara the wife, mom, friend, etc.

Why making it a daily activity is so beneficial 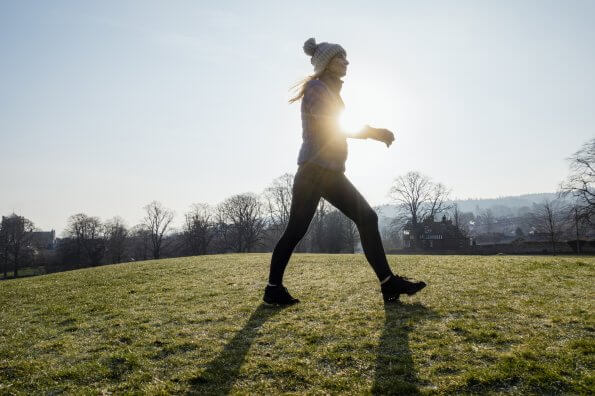 How walking changed my life

I started walking because it was easy. Now I walked with purpose. I walked so I would get out of bed in the morning. ...