We’re not really a “watch sports on television” kind of family, but now that the kids are old enough to appreciate the events and the achievement of the Olympics we were looking forward to watching the London Games.

To build some excitement, I thought I would show our 7-year-old daughter and 5-year-old son the Relentless video with Canadian Olympic athletes training hard for the London Games.

They both seemed to like it, especially our little guy who loved seeing the divers somersaulting in the air before hitting the water. Our daughter thought it was “cool” because it showed her some of the Olympic events.

It was briefly interesting to me that they each seemed to take away different things from the video. Then we forgot all about it, or so I thought, until a few days later when we were at my parents’ house for a Sunday visit.

After playing outside for a while and running all around the yard, our daughter showed me a list of events she had just completed in her own mini-Olympics game including the medal she had awarded herself for each category.

The girl who has been known to describe herself as “not liking sports”, told me that she had used everything in our sports bag: t-ball, soccer ball, football, and a Frisbee; plus the neighbours’ pond for “fishing for leaves”; she substituted her arm for a golf club; and counted the previous day’s swim at a friends’ house as the swimming event.

I love that she did this because she had a blast and was so happy with herself. But it also showed me that she’s internalized the idea that physical activity is fun, to the extent that she’s incorporated it into her imaginative play without any interference or coaxing from us.

It’s a bit like how she introduced writing and reading into her playtime once she had those skills under her belt. And it reminds me of the one thing that stuck in my head from those in-class driving lessons I took years ago: the idea of conscious incompetence vs. unconscious competence. She’s gone from having an acute awareness of her lack of sports skills to being physically active for fun without thinking about it. Pretty cool!

However, don’t think that this means that our kids have visions of standing on the podium in real life.

The next day when I asked them if they want to be Olympic athletes when they grow up, I got the following responses:

So I do believe we have turned another corner in our sporty journey, but the kids are staying true to their bookworm roots. And who says a writer and librarian can’t throw around a football or play a round of “arm golf” while discussing the latest literary news?

Why the Russian doping scandal can’t extinguish the Olympic flame

3 reasons to watch the Winter Olympics 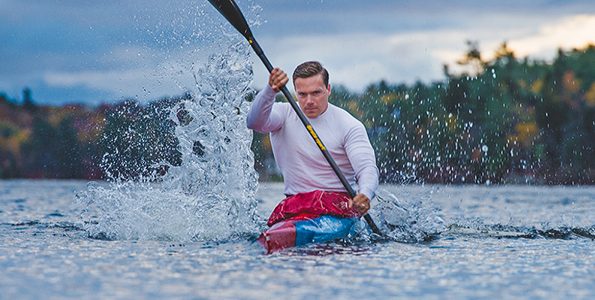 Cheer on Team Canada canoe-kayaker Mark de Jonge as he ...

This is Mark’s second Olympic Games

Confessions of a non-sporty mom

Sara Smeaton knows her kids need to be physically literate, but wonders how to do it