My youngest son, Cam, has always been full of surprises.

With a flair for the dramatic, Cam decided that he would make his grand entrance into the world more than 12 weeks early. With the ensuing medical issues, including collapsed lungs, chronic lung disease, infections, viruses, heart concerns, and prolonged gastrointestinal and feeding issues, his stay in the neonatal intensive care unit proved… eventful. It was a very long and trying 165 days before we gratefully brought him home for the first time.

Six months of sitting in a hospital chair also took a toll on me, physically and mentally. That half a year in Montreal Children’s Hospital was the longest and scariest time of our lives, but ultimately brought about some interesting and positive changes.

Our family has always had an affinity for outdoor sports and activities. With our older son, who was four when his brother was born, we biked, hiked, camped, and tried to model ourselves as active parents. But with a long hospital stay, and then a medically fragile infant at home, our life, and our lifestyle, had taken an abrupt turn.

I knew that making physical activity a regular part of our lives again would be beneficial to my mental health, and developing Cam’s severely delayed motor skills would nurture him to foster physical literacy, which would benefit all aspects of his life.

Armed with advice from our physical and occupational therapists, we started strollering to our neighbourhood parks, where we could use the graduated challenges of the playground to help build a solid foundation of physical movement, while in a fun and encouraging environment.

At around 11 months old, working on sitting unassisted was one of Cam’s big challenges. Baby swings at the park with a nest of blankets provided enough support and encouraged him to strengthen weak muscles, while the back-and-forth motion engaged and developed his vestibular system (balance) and helped his proprioception (coordinated movements and body awareness).

Premature babies’ immature sensory systems can easily become overstimulated, and they tend to have low muscle tone, especially through the core. Also, many premature babies have tight muscles, so it was important to keep our initial park visits short, follow Cam’s cues, and make sure we kept the focus on play rather than “exercise.”

Related read: Active for Life activities for parents and kids from 0 to 12

After the great victory of unassisted sitting came crawling, and eventually, walking and balancing. First we followed lines on the ground, and then progressed to holding his hands while he walked along small logs, low curbs, playground borders, and park benches. All of this helped develop his dynamic balance, and gave him confidence to try more daring feats on his own. His big “Aha!” moment came with jumping by himself. Oh, the jumping!

Leaping off those different obstacles became a playground highlight, and I was delighted to see his confidence expand with each landing. He would repeat movements, making subtle changes in his balance, always encouraged by the natural motivation of outdoor play and his desire to be like the “big kids.”

Walking, running, and jumping opened up a whole new world where he could chase after his older brother, and get somewhere by himself—a big moment for Cam (and me).

Once his legs were more coordinated, we played follow the leader through crawl tunnels, across bridges, and down slides while changing directions and speed. “Red light—stop. Green light… GO!”

Having an older sibling he wanted to emulate meant Cam was constantly testing his limits and trying with fierce persistence to get to the next developmental level. Rolling down hills together (with squeals of laughter and lots of hollering) improved his body awareness and balance, and climbing higher and higher vastly contributed to his upper body strength and confidence.

By age four, Cam’s fine and gross motor skills had developed to the point where he could engage in more complicated playground activities requiring coordination and balance. By five, he was determined to master the monkey bars.

Tentatively at first, he started swinging back and forth on one bar, lifting his knees to his chest, and returning to the platform. This year at age six, he’s now able to coordinate the muscles in his legs, arms, and torso, happily (and triumphantly!) crossing from one end of the monkey bars to the other.

Slow and steady progress through play—while simultaneously working on core body strength, balance, flexibility, and coordination—has helped Cam catch up to his peers, reaching all the expected physical development milestones.

An added bonus of all of our playground adventures has been for Cam to learn empathy by playing and socializing with children of different abilities. Through active park play, he has also learned to share, communicate, and take turns with others.

Though Cam still has some medical issues related to his extreme prematurity, he is now able to fully participate in sports he enjoys, like soccer and skating. I credit all the years we spent together in unstructured free play, climbing trees, scaling rope structures, and jumping from heights.

Setting screen time limits for our kids can be a struggle. The good news is there's a range of apps and tools that can ...

Check out these five amazing playgrounds 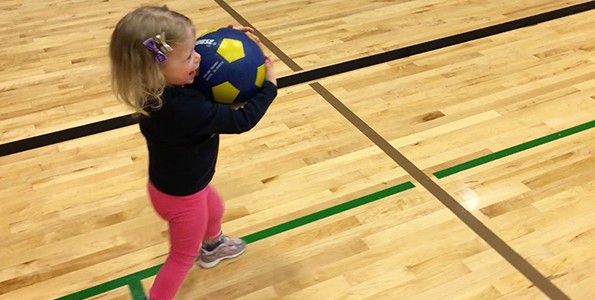 Kids of all abilities get added benefits through activities that ...