Kara Lang says a lifetime of playing sports has taught her more than just how to be active.

“It helped me develop confidence and self-esteem. It taught me to set goals at a young age,” she says.

“And it gave me a chance to dream, to aspire to things that were pretty huge.”

Indeed. Lang has been named the first official ambassador of the 2015 Women’s World Cup. The renowned international soccer tournament will take place in six cities across Canada, June 6 to July 5, 2015.

“It’s my job to promote the tournament and to encourage Canadians across the country to recognize the fact that we have the world’s largest sporting event for women coming into our back yard,” Lang says. “It’s an incredible opportunity.”

One that Lang has been working toward her entire life. Born in Calgary, Lang, 27, grew up in Oakville, Ont., where she played myriad sports: “Figure skating, tackle football, cross-country, volleyball, track and field, basketball. Did I mention basketball?” she says with a chuckle.

Figure skating was her first love, but she quit after the sport became too expensive to continue. Soccer and basketball quickly filled the void. “My mom played a little bit of soccer, and my older brother played,” she says. “That was the main reason I wanted to play.”

But by her early teens, Lang had progressed far beyond impressing her family. She was being recruited for the national teams for both sports, and she had to choose one.

The decision, she says, was easy. “The idea of playing in a World Cup for soccer was more attainable than competing on a world stage for basketball,” she says. “There were a lot more opportunities in soccer for my generation.”

The rest, as the expression goes, is history. Lang has played in two FIFA World Cups (2003 and 2007) as well as the 2008 Beijing Olympics. The youngest woman to ever have been chosen for the women’s national team — the photo at the top is from 2011, when she and Team Canada were playing the national team from China in Toronto — she also played for the Vancouver Whitecaps FC (Women).

And she was training for the upcoming World Cup when she injured her knee this year. A third cup was out of the question. She told a Canadian Press reporter shortly after the announcement this spring that she was “looking forward to teaching yoga again.” She also announced a gig as a sideline reporter for TSN at the Montreal Impact and Toronto FC games.

Lang, who will work for TSN at the Women’s World Cup next summer, says she knows women’s soccer has a long way to go before it reaches the international level of recognition given to the men’s FIFA games.

“But the women’s game is growing so much,” she says. “We’re expecting more eyes on it than we’ve ever had before.”

The Under-20 games are special to her, she says. She played the U-20 Women’s World Cup, at that time called the U-19 Women’s World Cup. It was, she recounts, “an incredible experience. It was also the first time Canadians really started paying attention to women’s soccer and when many of the current players on the women’s team got their start,” she says.

“The way the country embraced us and the tournament that summer was totally unexpected, but also something none of us will ever forget.”

She is now recognized by fans — mostly young girls — who have seen her play, or seen her on TV. And she’s hoping those young audiences will watch the upcoming Women’s World Cup and be inspired as players.

“Young girls are tuning in, and they’re watching,” she says. “The whole world pays attention to soccer.” 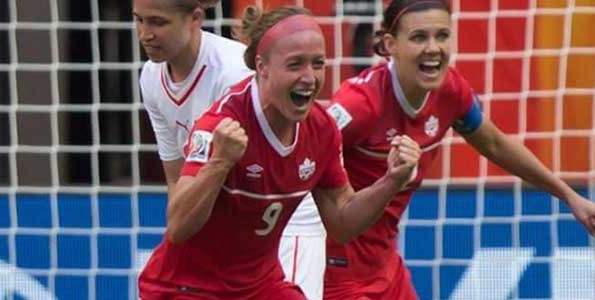 What it’s like to score a goal for Canada according ...

How to get your child started in soccer

Putting the needs of the players first is key