Your kids may not ever make it to each of the 195 countries in the world (at least not in one year). But you can give them a taste of various cultures by introducing them to games and activities from around the globe. Pull out a map, pick a spot, and travel your way to fun.

With almost 22% of Canadians originating from other countries around the world, there are many kids who would love to proudly share their birth country’s games. And let’s face it, who doesn’t want an extra idea or two to keep your kids moving?

¿Lobo estás? (Where is the Wolf)

This is a spin on the ever-popular, “What Time is it Mr. Wolf?”

While children walk in a circle, the “wolf” stands either inside or outside of the circle. The children sing a Mexican rhyme which translates as:

What is the wolf doing?   The wolf describes various actions (such as, “I’m putting on my coat,” or “I’m eating my breakfast”). But when the wolf answers “Ya estoy aquí” (I’m here) it’s time to run!! Whoever the wolf catches becomes the new wolf.

Coelho na Toca (The Rabbit in the Burrow)

Think of this as a twist on Musical Chairs (without the possible furniture damage). In this fun game, players are divided into groups of three with one player starting as “it” or “the rabbit without a house”.

Two people from each group of three put their hands together to form a house and the other member of their group stands inside the house. When the rabbit without a house calls a signal, all rabbits (including “it”) must leave their own house to find a new one. Whoever ends up without a house then becomes “it.”

Players required: groups of three (at least three groups would be best) plus one extra player
Equipment required: none

In this duck-duck-goose-type game, kids sit in a circle with one child outside the circle who is “it”.

Players required: ideally a group of five or more
Equipment required: a handkerchief (or other light piece of fabric)

Ephedrismos (Carry on the Back)

This game, which is seen in Greek art from at least 5 BC, is played with two children. A stone (or other target) is placed upright on the ground. The two players throw rocks to knock the stone over. Whoever knocks the stone over is the winner who then is carried by the non-winner on their back. The winner places their hands over the eyes of the carrier who then has to find the target and touch it with their foot.

Players required: two
Equipment required: one target (could be a stone, an empty bottle, a plastic bowling pin) which can be knocked down, and two rocks or balls

The aim of the game is to make players laugh … literally! All the kids sit in a circle with one child chosen to be “it.”

“It” holds a handkerchief which can be wet or dry and holds it in front of the first child’s face while saying, “the cencio mollo has come to you.”

“It” tries to make the player laugh and if they do laugh, they must perform a “penalty.” The penalty could be anything from singing a song, doing five jumping jacks, acting like an animal. The options are limitless. If the player does not laugh, then “it” moves to the next seated child and attempts to make them laugh.

Players required: ideally a group of four or more
Equipment required: a handkerchief or any other item which could be used as a prop to make a child laugh (maybe a stuffed animal, a rubber chicken, again, the options are limitless)

Two children sit on the ground facing each other with one of each of their feet touching. This is the tinik (almost like a short fence). The other players line up and attempt to jump over the tinik.

After one round of jumping over the two feet, the two children on the ground then join their other two feet on top of their first two to make the tinik a little higher. Players again attempt to jump over. Whoever is unable to jump over without touching the tinik is out. The seated players then add joined hands above their joined feet, and then their other hands. Their hands go higher and higher until only one player is able to jump over the tinik.

Players required: at least four (but the more the merrier)
Equipment required: none

In this popular Chinese throwing game, players draw two lines on the ground about 8 feet apart. A stick is placed between the lines and players stand on the first line. The aim of the game is to throw sticks at the stick on the ground in order to move it over the second line.

Players required: at least two
Equipment: a stick to be used in the middle of the two lines plus sticks for the players to throw

Fire on the Mountain

The runners must then race to the kids still standing (the inner circle) and stand behind a player. Whichever player doesn’t manage to pair up with an inner circle player then becomes the leader.

Players required: an even number of children, ideally at least 6
Equipment required: none

Think of this as the Ghanese version of Rock, Paper, Scissors with a lot more movement. This game is played by at least two kids but can be played by several more. If there are two players, one is chosen as the leader and the two players jump and clap at the same time. As they jump, they thrust one foot forward. If the leader and the other player have the same foot forward, the leader wins a point. If they are different then the other player wins a point.

If there are more than two players, all the kids form a line. The leader jumps and claps as above and if they “win” by sticking the same foot out as the first player in line, they then move down the line player by player. If they don’t “win”, the opponent would then become the leader.

Players required: a minimum of two
Equipment required: none

How low can you go? In this traditional Australian game, two players throw a ball back and forth. When a player drops the ball, they have to go down, down, down, onto one knee. After a second drop, the player goes down on two knees and the players continue to throw the ball to each other.

After each subsequent drop, players lower onto one elbow, two elbows, and eventually their chin after which they begin the game again. It almost looks like a twist on Twister to see one kid on two knees trying to pass a ball to another on one elbow!

Players required: two
Equipment required: a ball (could also be replaced with a bean bag or a similar small throwing item)

Could 2020 be the year of outdoor learning?

The new school year presents an opportunity for schools to reimagine the school day and explore the use of outdoor learning and nature classrooms. 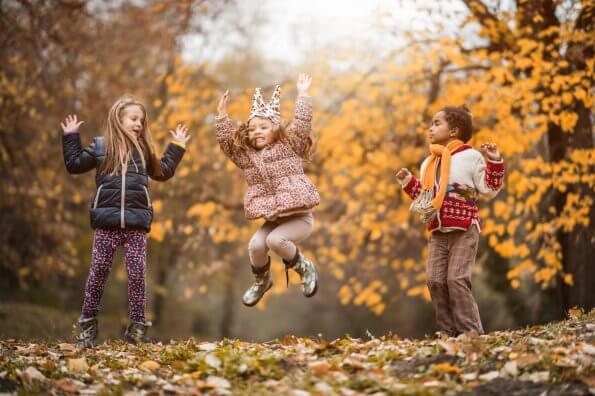 Coaches can play a pivotal role in creating a positive social environment for their female players and making sure everyone feels supported.

How to share the love of outdoors with new Canadians

Here are some sun safety tips to remember: Pay attention to the UV index. Sun protection is necessary when the UV Index is 3 ...

To achieve full potential, young hockey players should develop skills in other sports