There’s a reason why soccer is the most popular sport in the world. The rules are easy to understand, and all you need is a ball!

Millions of people play soccer around the world without ever being part of a team or a league. You don’t need real goal posts or a regular soccer field. All you need is a small patch of grass at home or at a park.

Here are some tips for getting the Beautiful Game going in your neighbourhood.

In regular adult soccer, you play with two teams of 11 players each, one of whom is the goalkeeper. For your neighbourhood or picnic pickup game, it’s actually more fun to have far fewer players because everyone touches the ball more. And while you might want to play with positions, it’s more fun if everyone has the chance to get involved in the play.

The goals of pickup soccer are to have fun, build skills and give everyone a chance to score, dribble or make a successful pass. The two main concerns when playing with a mixed group of kids, teens and adults are:

The solution? Follow these rules to ensure everyone has fun:

Note: An “indirect free kick” means that you cannot shoot straight at goal. For pickup soccer, simply make it a pass to a teammate.

The beauty of soccer is its simplicity.

The most important technique in soccer is kicking with the side of your foot. Kicking with the toe is bad technique because it provides very little ball control. If you want to make sure that children are practicing good technique, make a simple rule like “Toe no go”.

This means if someone kicks with their toe, the other team gets the ball for an indirect free kick from the place where the person kicked with their toe.

Correct passing is done with the side of the foot, and even some of the top professional players use the sides of their feet to shoot!

Soccer is so popular that lots of kids and adults in Africa, Asia and Latin America play on pavement or in rough patches of sand and gravel where we might never consider playing. These kids in Thailand built a floating dock to play soccer because they didn’t even have a beach to play on.

19 simple ways to raise kids who love being active

As a mom, I've tried to nurture my children's love of movement and physical activity. Here are my best tips for parents.

Many municipalities offer day camps or specialized camps. Some are general programs that give kids a chance at many different types of activities, including ... 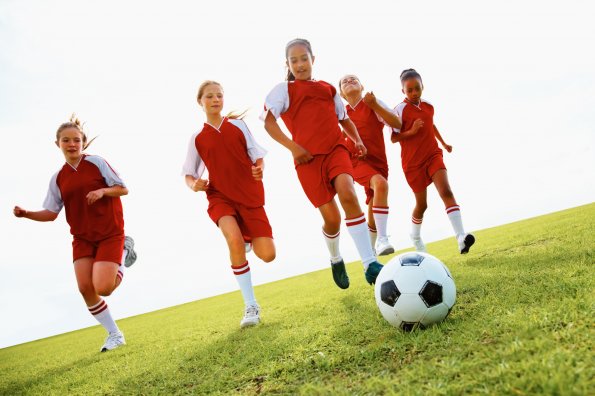 How to get your daughter inspired by the FIFA Women’s ...