If the sound of people complaining about daycare could be set to music, you’d have a tune more anguished than anything that ever came out of Lilith Fair. Those who have found the holy grail — a daycare they love, that’s close to them, and cheap enough that it doesn’t force them to eat ramen noodles for dinner — wisely keep their good fortune to themselves.

At the risk of adding “1 more thing” to the list of considerations, parents should nonetheless look at 1 more element. Does your child’s daycare make the grade for developing physical literacy?

We’ve seen the disturbing health stats on Canadian kids, and we all want the best for our children, but it can be hard to ensure our kids are getting enough activity. There can be reasonable concerns over a lack of safe outdoor spaces, long distances between homes and schools limiting active transportation possibilities, busy parental schedules, and simply getting kids away from computer games and TV.

So it’s natural that working parents might look to their child’s daycare to help them pick up the slack. The question is whether or not your child’s daycare has the staff training and essential resources to support physical activity and the development of basic movement skills.

Parents have the power to change things

Don’t cue the emo music just yet, though. I spoke with early brain development expert and Active for Life contributor, Professor Dawne Clark, who believes that we parents have the power to effect change. We have to make it clear that we recognize the importance of physical activity to our children’s overall well-being because this is what creates the demand for better policies. In other words, as always, it starts with us and there is power in numbers.

This is something Clark both well understands and has proven. Beyond being a professor at Calgary’s Mount Royal University, she is also the director of the Centre for Child Well-Being and the hero who helped start the ball rolling on Alberta’s child care reform. Along with her devoted students and equally passionate colleagues, Clark worked tirelessly to create a policy plan that recognizes the need for sweeping changes in the care of children, particularly the under-served who are younger than five years old.

Their diligent research first revealed the problems with the existing day care model and led them to develop their own “apple” model of education, with physical literacy as the core. This model is what they used to help build a new set of guidelines for Alberta child care reform.

And although Alberta is the only province, so far, to have successfully executed their policy plan, those changes are making a difference; many provinces across Canada are now following their lead, with Ontario, Manitoba, Nova Scotia, and Newfoundland especially showing huge progress.

I managed to coax Sue Jackson, one of the aforementioned Holy Grailers, and mother of 2 boys, to risk public stoning and admit she’s lucky enough to have her youngest son in a dream daycare, Ontario’s Sunnybrook Creche Childcare Centre.

Jackson, who’s eldest son is in elementary school and goes to his school daycare, says the difference between the two boys based on their after-school behavior is telling.

“At Sunnybrook, they follow the daycare act to the letter, but at Sean’s school it’s obvious they don’t. The difference between those kids is night and day, because my youngest is getting outside and moving, he’s calmer and easy, and my other has all this pent up energy not being used by the time we pick them up, from not getting outside, from not getting enough activity.”

To figure out what gave Sunnybrook such an edge, I spoke with director Antoinetta Monaco, and it’s clear she’s on the same page as Clark and her Alberta colleagues when it comes to physical activity. “Physical literacy is extremely important,” Monaco enthusiastically agrees. “Obviously it benefits health, but it also helps with their emotions; the less activity, the less chance they have to get out and move, and the harder it is to deal with the everyday stimuli they’re confronted by.”

Monaco allows that during the particularly cold winter that hit much of Canada last year, there were days when they had to come in early, or not go out at all, but there is opportunity for physical activity everywhere. “We have an interactive room that encourages movement. We schedule extracurricular activities like dancing, and softball. Teachers will implement obstacle courses in the classroom, and I monitor to make sure teachers are incorporating activity into day-to-day learning.”

Jackson mentions that Sunnybrook partners with the Veterans home to for inter-generational bonding. Bi-weekly visits to their “grandmas and grandpas” help inspire empathy and brighten their day. The centre also participates in the Terry Fox Run and takes kids on walks through the adjoining hospital to help get them up and active during the day. And she says that the interactive room, with its riding toys and Gymboree-like climbing equipment, is a wonderful place for her son to start his 7 a.m. drop-off.

So Sunnybrook is wonderful, but Jackson recognizes that, even in a weaker care centre, sometimes it’s luck of the draw when it comes to who’s watching your kids. She extolls one teacher who understood that the personalities in her son’s class learned better when they weren’t being asked to sit still, so she designed all learning activities with constant movement. Says Jackson admiringly, “This teacher didn’t care if it was cold, she got the kids outside. If she was doing a measuring activity, for example, she’d have them measure the wall, measure the floor, run around, anything to keep them active.”

Monaco, like Clark, believes parents shouldn’t hesitate to get involved, and to ask questions of their child care centre. Parental participation, she stresses, can make the difference. “We had a soccer player dad come in and teach soccer. Do you know yoga? Great. We’d love to get the benefit of parental skills and involvement, and your kids benefit, too.”

Monaco has it right. As parents, the more we prioritize the importance of daycares that deliver quality physical activity and skill development, the better the chances for us to reap the rewards of raising happy, healthy, active kids.

Start by asking the right questions.

One response to “Do your kids get enough physical activity at daycare? Here’s why you should care” 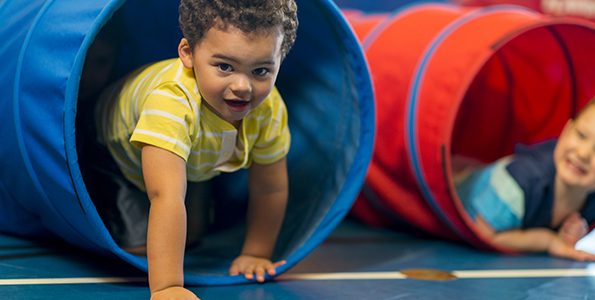 Canadians "could do a better job" says John Cairney

How educators can use the APPLE Model

Risk in play – possibilities and opportunities

The problem is that making things too safe can starve children of the very experiences that best help them learn how to keep themselves ...