Before you have a child, you think you know what kind of parent you’re going to be. I thought I’d be relaxed and go with the flow; turned out my daughter thrived on structure. I imagined we’d spend hours playing with each other’s hair. Nuh-uh. That kid even looks at a brush and she screams.

What I got really wrong, though: I thought I was going to let her be a blank slate, let her fall and fail and make mistakes and learn from them. But from the moment she was born, without really realizing it, I’ve been inadvertently preventing her from hearing her own inner voice that tells her to, “Go for it.”

Every time she tried to take a bigger step in the playground, my frown deepened in fear. Every time she got innocently curious and ran off to see something, and I’d yell, “Watch out,” “Slow down,” “Be careful.”

Much as I hate parenting terms, I see now that I’ve been a helicopter parent. Since my hovering has been mostly around sports and physical challenges, maybe I’m not quite using two propellers. But there’s at least one working overtime.

There’s a running joke among my friends that I never have to worry about the dreaded mid-day call from school. You know, that one where they’re calling to say your child fell doing something crazy in the playground? My daughter is so cautious she won’t attempt more than the first two monkey bars. And, I’ve secretly been thrilled; so long as her timidity never held her back socially, I’ve been quite content not to have that extra worry, on top of the usual ordinary parenting concerns.

My husband taught her to ride a bike and he said, “Stay straight, look ahead, you can do it.” It suddenly hit me that I was always telling her what not to do. I’m not saying I didn’t offer encouragement, or appreciate her success, but I may have reduced the accomplishment’s validation because I was too busy worrying to enjoy the moment and celebrate it with her.

I really became aware of all this recently during a hike with friends and their particularly adventurous sons. The boys were practically flying down the ramp and I felt myself start to warn her to slow down. They were running down hills, and my mouth opened to caution her again. It was like an out of body experience — or a really bad after-school special — and I suddenly just got it. She was listening to her voice, trusting herself to take a chance, and I was about to ruin it. I braced myself, smiled, and watched with pride as she began to really explore her surroundings, climbing and moving with ease and certainty.

Since that day, I’ve been watching my beautiful, independent child really take chances, and while I may occasionally tense up when she decides to scale the playground wall, goes a little fast on her scooter, or finally, confidently reaches for that third monkey bar, I will force myself not to stand in her way.

I may never stop being a helicopter parent, but I will do everything I can to make sure she’s in the pilot seat.

4 responses to “Playground zen, or how I learned to keep worrying but let my kid fall”

Fat biking: How to get your kids to ride cycling’s ...

This might be the most “Canadian” image we’ve seen in ...

This RCMP officer carried a ball hockey stick in his cruiser 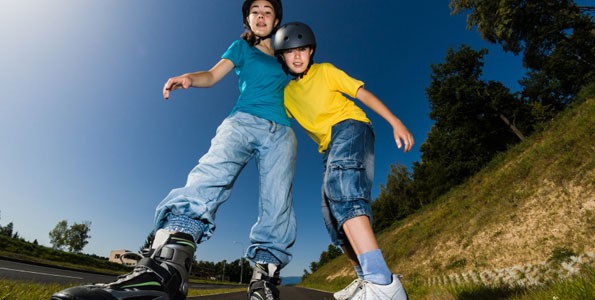