“I gotta keep practicing, look at this one, this’ll be it!”

We were at our town’s new skatepark for the fifth straight day, and I was watching my 11-year old transform from shaky to confident as he crouched, balanced, and popped his board into the air before landing firmly back down, in what he assured me was an “ollie.”

The determination and hours of perseverance paid off, and the huge grin as he took off his helmet and poured out the sweat showed me (and everyone around us) just how proud he was of landing this new trick.

“Can we stay just one more hour? Pleeeease?”

Looking about, it was obvious that he wasn’t the only one who was stoked, as all around us high-fives and fist bumps were interspersed with words of encouragement.

Nearby, toddlers tested out their balance and zipped fearlessly down ramps, moms and dads rode alongside their kids, and a teen was showing a group of youngsters a different way to place their feet while giving an impromptu motivational speech: “Guys, if I can do this, you can do it too!”

What was once primarily the domain of teen boys during the ’80s and ’90s, skateboarding’s diverse culture and physical benefits—gaining balance, flexibility, and developing new skills—are now attracting participants from all genders and age ranges.

Blurring the parent-child gap that exists in many sports, skateboarding has moms and dads stepping onto a board for the first time alongside their kids (while passing tips back and forth), while other parents are getting back on a deck and showing off old tricks at state-of-the-art skateparks—though with perhaps a bit more padding and caution this time around!

Yash Presswalla of Impact Skateboard Club in Toronto said he’s definitely noticed parents joining their kids at the skatepark, where they’re discovering that skateboarding can be both therapeutic and an effective stress-reliever.

“It’s hard to worry about work deadlines when you’re trying not to fall on your rear end!” said Presswalla.

So many adults expressed an interest in learning that last year the club started giving adult lessons that focus on safety, fun, and inclusion.

“Skateboarding isn’t just a hobby–it takes focus, creativity, determination, and resilience. The skills learned in skateboarding are valuable and transferable. With the right tools, kids are able to make better decisions in life.”

In addition to encouraging a healthy lifestyle, the social benefits and judgment-free space are something mentioned by all the parents and kids I spoke with.

Like many adult skateboarders, Richelle Videka skateboarded when she was younger, and was inspired to get back into it this year after her nine-year-old daughter Riley started riding with Impact.

“Getting out together at skateparks has allowed us to progress together while making new friendships,” Videka said.

“If Riley could go every day, she would. The skateboarding community is something we love being a part of—everyone is so rad and accepting. We are supporting each other, picking each other up after a hard bail, and, overall, helping to build each other’s confidence.”

For Ben McHugh, a father of four from Montreal, taking skating up again after a long absence gives him a way to be active with his kids at the same place and time, yet everyone can build skills at their own pace. “With other activities, you’re often either on the sidelines watching them or having to moderate your intensity. At the skatepark, everyone is happy, and sweaty!”

He added: “It’s motivating to stay in shape and try to keep up. Also, as a parent and role model for them, exercising together helps set them up with healthy habits for life!”

While you can always grab a board and head to the nearest piece of smooth asphalt to practice on your own, there are also plenty of clubs across Canada that offer courses for children and adults:

How geocaching can get your family outside, moving, and having ...

TED Talk review: Why some people find it harder to ...

Plus a few tips on how to stay motivated 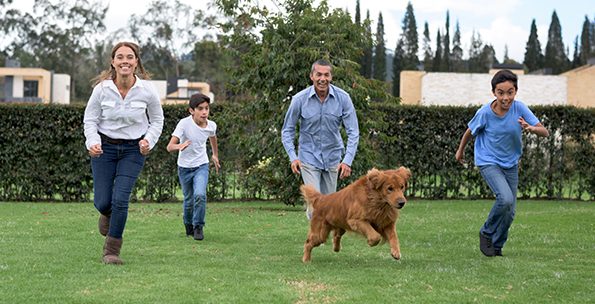 6 ways dogs and kids can have fun moving together