Caleigh MacPherson, a soccer player for the Cape Breton University (CBU) Capers, fell in love with the sport from a very young age. She was just four years old when she first started playing soccer, but she said the fact that she spent time spent playing other sports too is what helped her become the high-performing athlete she is today.

Participation in multiple sports has been proven to help young athletes develop physical literacy as they learn fundamental movement skills that translate across various sports and activities. For athletes like Caleigh, participation in more than one sport at a young age helps develop confidence, competence, and a lifelong love of movement.

While growing up in Lingan, N.S., Caleigh participated in other sports, including basketball and softball, but soccer always remained her favorite. She was awarded Most Valuable Player all three years at her high school, Breton Education Centre, but still considers playing for her hometown CBU Capers as being her biggest accomplishment to date.

When asked why she feels it’s important to play multiple sports, Caleigh said that it was important for her to stay active during off-season and develop other skills. She also noted that she got to meet many friends through the sports she played.

“Playing more sports gets you out there more,” she said.

Caleigh’s advice for young girls who participate in sport? “If things don’t always go your way, don’t give up.”

Caleigh is currently enrolled in the Bachelor of Science program at Cape Breton University and loves her program. When asked why she chose CBU, she said she really likes that the classes are small; this gives you the opportunity to get to know your professors. She was also drawn in by the university’s highly competitive sport teams.

Want to catch Caleigh in action? The CBU Capers ended their regular season on a high note as they defeated the Université de Moncton Aigles 4-1. The win guaranteed the defending Atlantic University Sport (AUS) Champions second place in the AUS standings and a first-round bye to the semi-finals being hosted here in Sydney.

The Capers will play in the semi-finals on Friday at 4:30 p.m. against the winner of the quarter-final game taking place this Thursday. All championship games are being held at CBU, with more details and a full schedule available on the AUS Soccer Championship site. 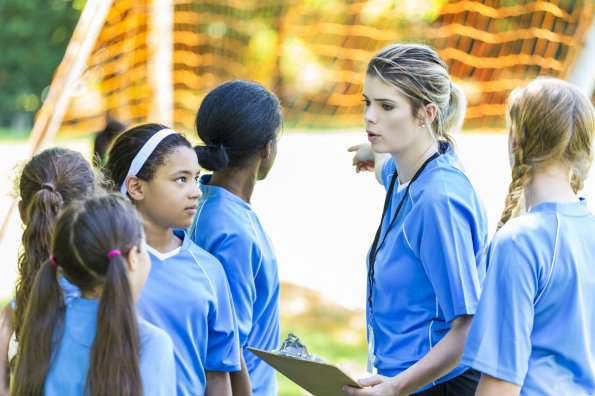 Coaching girls? Here are three ways to help them get ...

“Any questions?” This well-meaning phrase, when posed to a group of young female athletes, often results in 10 or more hands shooting up, and ...