Shooting a hockey puck is one of the most challenging skills anyone can master. Think about it: a seven-year-old balancing on narrow steel blades on slippery ice, trying to whack a rubber puck the size of a donut with a four-foot-long stick. Nothing natural about this task.

But let a bunch of kids loose on a sheet of ice, throw in a bucket of pucks, and they will shoot and shoot… because it’s fun. And that’s the secret: playing is fun and fun is the key.

I have coached minor sports twice in my life. In both cases I “volunteered” because my kids wanted to play, and no one else wanted to coach. This kind of situation was not uncommon in the small town where we lived.

The first time I coached it was my son and his friends in U8 hockey. The second time it was my daughter and her friends in high school basketball. And both times it was a total blast. Coaching kids brought me some of the happiest memories of my life.

My work at Active for Life influenced the way I coached.

“If I’m to be a coach,” I told my wife as I was debating to take on the role, “I’m going to make sure the kids develop more than just their hockey skills!”

“Just make sure they have fun,” she responded with a smile.

I soon discovered my great goal was not that easy to put into practice. One challenge was that I had to come up with practice plans that would keep kids moving and develop their hockey skills, while having lots of fun.  I knew if I could achieve this, kids would not only become better hockey players, but they might have a good enough experience that they would want to keep playing and keep physically active as they grew older.

And that’s where the three-ingredient recipe called physical literacy—skills, confidence and the love of moving—meets coaching.

When I coached U8 hockey, we had a game called “20 pucks.” The goal was for the kids to find “targets” (dots made with dry markers on the boards all around the ice surface) and shoot a puck at these targets at least 20 times.

We had a routine. When it was time for a water break, I’d blow my whistle and yell “20 pucks!” Next the players blasted off in all directions, grabbed a puck, skated around the ice looking for targets on the board. Once they found a dot, they shot the puck at it. Some kids shot 20 pucks at the same dot. Some shot a few at a dot and then moved on to another target.

We played “20 pucks” every practice throughout the season. If you do the math, that’s 6 months x 8 practices per month, which means the kids played “20 pucks” at least 48 times and shot pucks with the intention to hit a target at least 960 times. And by the end of all that organized chaos on ice, the kids had smiles on their faces 960 times, too.

“20 pucks” was one way we adapted the physical literacy recipe to hockey.  As coaches, we used games to develop skills, confidence, and the love of hockey in our young players. And we tried hard to keep to this plan every practice, every drill, and even during our off-ice warm-up.

We started with very simple questions early in the season. As the kids got better, the questions became a bit more technical, but always tailored to meet kids where they were at in their own progression: “What happens if you turn your hands down toward the ice as you shoot? What happens if you keep your elbows close to your body?”

Asking questions rather than barking technical cues got kids to think, wonder, and “create” their own mental model of how to shoot a puck. They were in charge. As coaches we were there to guide them.

Why the “20 pucks” method worked

“20 pucks” engaged the players in developing their shooting skills because it was fun yet challenging, as kids had to hit the target and figure out answers to our questions.

Another part of the game was to make the feedback we gave kids as meaningful as we could. To do this, we focused on helping them take stock of how hard they were working and how much they were improving. This grew their confidence.

All of this was done in a spirit of fast and dynamic fun, which helped kids enjoy the practices and hockey, and hopefully leave the season with a greater love of the game.

How your kids can play hockey at home

Walking the walk: The coach as role model

One response to “20 pucks, 960 smiles: How coaches can make practices more fun”

Coaching girls? Here are three ways to help them get ...

“Any questions?” This well-meaning phrase, when posed to a group of young female athletes, often results in 10 or more hands shooting up, and ...

7 benefits of coaching your child’s team

There are good reasons to consider volunteering 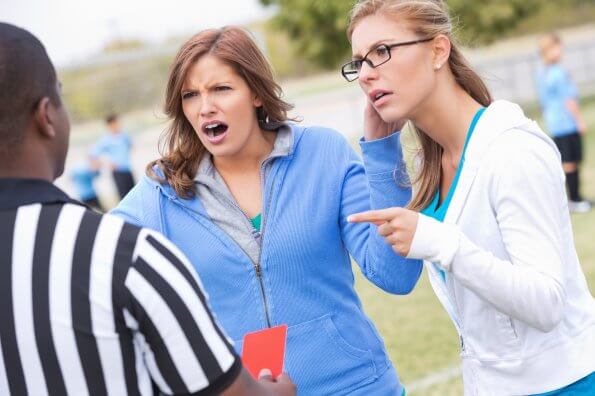 Offside parents: How one referee is calling out bad sideline ...

Referee shows the ugly side of parents and youth sports