Erik Guay is an alpine skier from Mt. Tremblant, Quebec. He has been skiing since he was 5 years old. Erik has been competing in Olympic Games since 2006 and he has three world championship medals including a gold in the Super G and a silver in the downhill at St. Moritz last year. He’s Canada’s most decorated downhill skier.

Erik has made the challenging decision not to compete in the PyeongChang Games due to ongoing problems with his back. He made the announcement on January 31 via his Instagram.

After a difficult season battling back problems it’s with a heavy heart that today I have made the decision not to participate in the upcoming Olympic Games in Korea. I’d like to thank my team behind the scenes, partners, sponsors, fans and of course my family for their amazing support and I’d like to wish Team Canada the very best of luck in the forthcoming Games.

A dad of four young daughters, and an AfL Role Model, Erik is dedicated to raising physically literate kids.

Connect with Erik on Instagram, and scroll down to watch a video taken of him last fall.

Speed round fun with Erik

What’s your most used emoji?
?

What was your favourite subject in school?
History

What activities did you do when you were a kid?
Karate, skiing, hockey, biking, soccer, basketball, pretty much anything.

Who is a role model you’ve looked up to?
Herman Maier

What is something you’ve never tried but would like to?
Surfing

Can you tell us about a time you failed?
I don’t fail, I just don’t always succeed.

What’s one thing you can’t live without?
Family time

Why is physical literacy important for kids?
If you teach a child to be active at a young age he/she will tend to be active later on in life and that’s the base for a healthy lifestyle.

Inspired by Erik? Get started by taking the first steps to becoming a downhill skier.

One Yukon dancer’s mission to lift Canadians’ spirits through positivity ...

By posting videos of himself dancing bhangra, Gurdeep Pandher says he's trying to spread joy, hope, and positivity around the world. 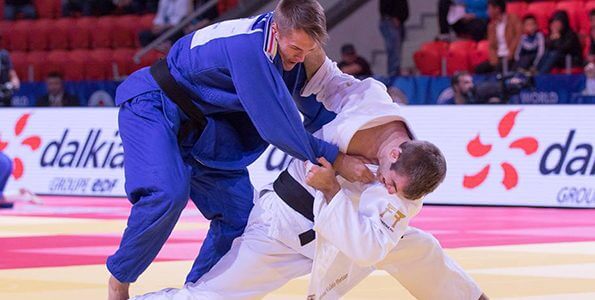 Antoine Valois-Fortier, Canada’s top-ranked judoka, is one to watch in ...

Aerial ski jumper, golfer, and champion of an active lifestyle