Back to previous
Hard to believe, but superstar athletes have parents too. Even two-time NBA most valuable player Steve Nash.

What were John and Jean’s secrets in raising three kids for success in sport? Did they feed them raw slabs of meat from an early age to stimulate an aggressive edge? Did they yell at them and whip them with birch branches to provide “motivation”?

Q. What did you and Jean do to get Steve, Martin and Joann active in sport?

Number one, we always led by example. We’ve always been active ourselves. I have played soccer from the time I was 10 years old, and Jean used to play netball. So we always had balls around when the kids were small. We would kick balls, throw balls, and just generally have fun playing together.

Q. What were the first sports or activities that your kids did?

Steve started playing soccer about age 5 and so did Martin. Joann started a bit later but she eventually took up sports and also did very well. They all played a variety of sports as they were growing up.

Q. How did you support them in their activities?

We basically just gave them lots of encouragement. I always say praise is the breakfast of champions. Kids will do whatever their parents praise them at.

If you pick up a spoon and start drumming with it, and your parents praise it, you might become a musician. But if your parents are always being critical and hurtful, then your kids are not going to pursue those things.

Q. What do you think are some of the benefits of kids playing sports?

Sport is not just about sports. It’s about getting along with people. Learning to win together, learning to lose together, and dealing with disappointment together.

These are important life lessons. Sometime later, if you are writing a computer program with ten other computer programmers, you need to know how to work together as a team. Sports help to teach those lessons.

To me that’s the crux of it. You may not do well at a sport, but you might make an important friend there, and you’ll learn a lot about getting along with people.

Q. Did your children ever have any negative experiences in sports? With coaches? With parents?

I remember one lacrosse game Steven was playing when he was about 10 or 12 years old. He went out and scored four goals, and the parents on his team started getting on his case. They were shouting, “Come on, Steven, don’t hog it! Pass it! Pass it!”

So he started passing every time he got the ball, and then the other team caught up and tied the game.

So what do you think the parents said? “Come on, Steven, get a goal! Don’t pass it! Shoot!”

We were driving home afterwards, and there were tears streaming down his face.

It was typical of the sports he played as a kid. The expectations from parents were unbelievably high. With most parents, the desire to win is a very negative thing.

Q. How can parents help their kids to deal with negativity, or disappointment in general?

I think you have to be very careful that you guide your children’s perspective so they develop a positive attitude.

For example, Steven played hockey when he was small, and one weekend his club announced it was giving out prizes to players. One of the prizes was a new neck guard, and Steven had recently lost his neck guard.

We played a game where Steven scored four goals, but he didn’t win the neck guard because the coach said, “Steven always wins everything.”

The coach gave it to a kid who was not as strong a player as Steven, but he’d had a good game. The coach took the opportunity to recognize someone who might not get the chance again. I appreciated what he was doing, so my job was to talk with Steven and guide his perspective.

I do the same now with my grandson, Caleb. We were kicking a soccer ball around recently, and he’d score and I’d say “Good goal!” But when I scored a goal against him, he suddenly got angry.

So I said to him, “Hold on, Caleb – I’m not going to play with you if you are going to behave like that. What does granddad say when you score a goal?”

So you have to manage their perspective a bit.

Q. What do you and Jean do now to stay active?

I’m also still playing full-sided soccer in a league in Arizona with standings, ID cards, the whole shooting match. When I’m in Victoria, I play in the regular winter league there.

To me, winning is not that important. The important thing is to get out there. Stay active, meet people. I am very competitive, but I don’t get upset if I don’t win.

Q. Do you have any other suggestions for parents raising their kids in sports?

Remember that praise is the breakfast of champions. If you make something painful, your kids will go away from it. If you make it pleasurable, they will stay with it. Because praise is positive. Praise is pleasure, not pain. You respond with praise, or you redirect. But don’t dump criticism on your kids.

2 responses to “Steve Nash’s dad on kids in sport”

“Window walks” and other ways to jazz up your neighbourhood ...

Even while social distancing, families can get out for walks in their neighbourhood. Here are some ideas to keep things fun and fresh. 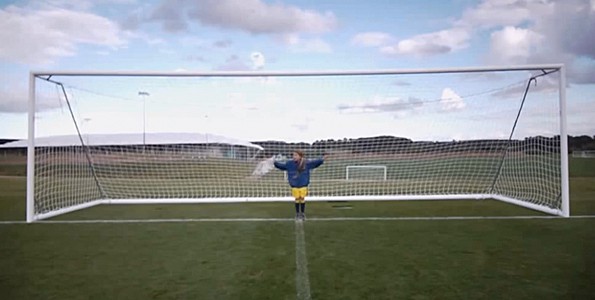 Size matters when it comes to playing fields for kids

August 11, 2014, Comments Off on Size matters when it comes to playing fields for kids